As a student at the original Filipino Kali Academy in the late 1970s, I attended one of the many weekend seminars put on at the school where Richard Bustillo and Dan Inosanto would bring in instructors or practitioners from a wide variety and array of martial arts and fighting disciplines. We had the opportunity to train in and experience arts from boxing to wrestling, from judo to savate, and from wing chun to aikido, as well as all the different styles and variations of the Filipino martial arts.

That “open arms” philosophy was one of the greatest things about Dan and Richard and the way they viewed fighting. If it worked, use it. It did not matter where it came from. This was a direct result of the way Bruce Lee viewed his approach to combat. In a fight, it doesn't matter if you use a judo throw, a boxing punch, and then a wing chun eye jab, or an aikido wrist lock. If it works, use it. After all, it's a fight and you've got to do whatever works against the opponent. Both being students of Bruce Lee, such was the philosophy and foresight of Dan Inosanto, Richard Bustillo, and the curriculum at the Filipino Kali Academy.

So one Saturday afternoon, we were introduced by Dan and Richard to a small Indonesian fellow who was a practitioner of a somewhat strange and exotic martial art he called Pencak Silat, a martial art that neither I nor any of the other 30 or so students along with me had ever heard of before. 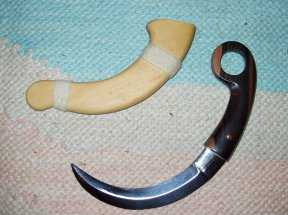 Although we were there to introduce ourselves to the empty-hand skills of Pencak Silat, the instructor did do a demonstration with a strange hook-bladed knife that he spun around in his hand like a buzz saw and struck with lightning quickness. I'd never seen anything like it before, and was immediately drawn to and impressed by its simple, yet devastating effectiveness in the hands of a skilled master. He called it a Karambit, and told us that it was a “steel tiger claw.”

At that time, I was not yet a knife maker, but the design and its use was filed away in my memory under the category of “Someday-Sometime.”

About five or six years later in the mid-1980s, I was contacted by a gentleman named Bill Sanders who was starting a magazine about knives and edged weapon fighting skills. He was a master of the art of Pencak Silat. And once again, that strange hooked knife, the Karambit, was a knife he used with great skill. We had numerous discussions about knives and the Karambit knife in particular, but the magazine idea never really got off the ground, and I moved forward with all the other aspects of my training and knife making careers. 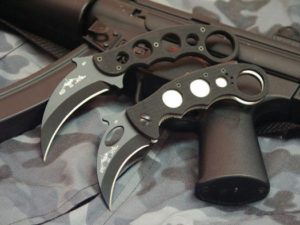 Then, in the mid-1990s, I was introduced to Chris Caracci, U.S. Navy Seal and plank owner of Seal Team 6. He introduced me to a hook-bladed knife that he had developed and learned to use with incredible effectiveness, especially in extreme, close quarters combat. I was so impressed that I made several versions for him and for myself, along with a little fixed blade neck knife that were all variations of that curved “tiger claw” design. Although they were not classic Karambit in the strict rules of the design, not having the finger ring in the butt of the handle, as I now look back in retrospect it was obvious where I was headed with the evolution of this design.

Then, in the late 1990s, at a training seminar I was teaching, I was introduced to a gentleman named Steve Tarani. I found that he and I had a lot of history in common, and I was definitely impressed by his skills and his expertise in the use of, once again, the Karambit knife.
Steve went on to great success promoting and training many in the use of the Karambit as an effective and efficient edged weapon defensive tool.
However, at that time there was no commercial or production availability of the Karambit knife design, albeit a few custom makers that were the only ones making some fixed blade versions of the Karambit style. After all, the fixed blade, one piece version was the traditional design of the knife, and the only way a Karambit was made up to that time.

Until … I looked at the Karambit knife design and thought, “I know I can design and make a folding 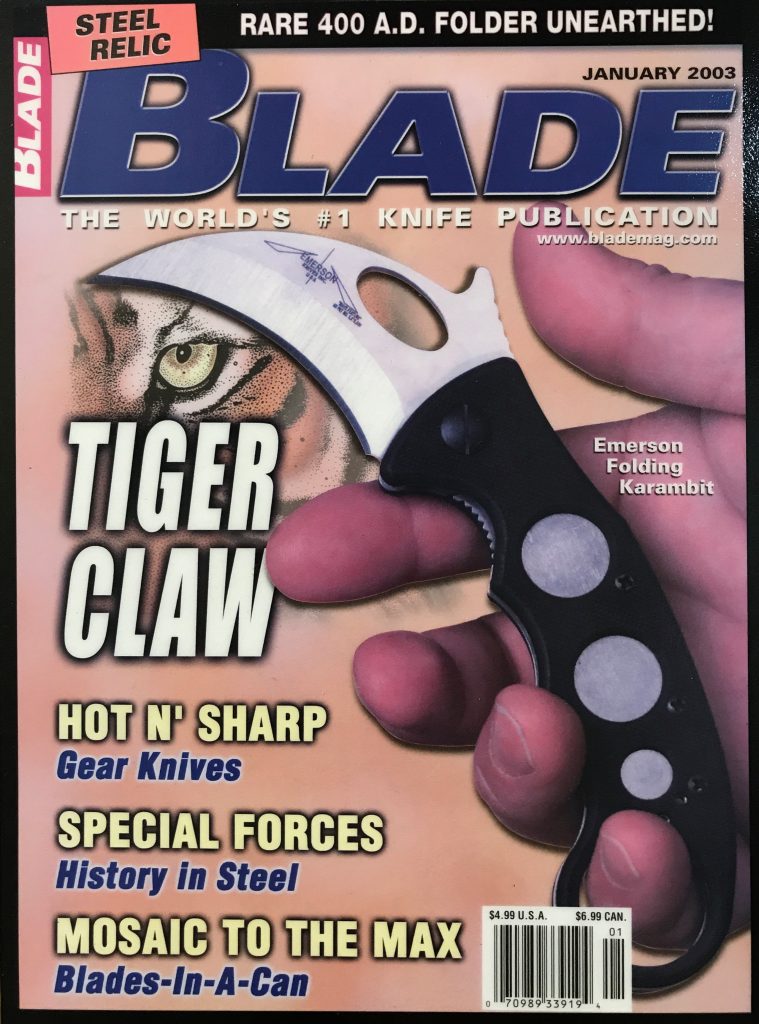 version of a Karambit knife.” So, with a pencil, some cardboard and scissors, I designed the first folding Karambit knife. It was not the easiest knife to design, to perfect, because of the pronounced curve of the blade, the point at which it should pivot, and the danger of the blade being close to the finger hole when in the closed position. On top of those concerns, this knife – like all Emerson knives – had to be ergonomically correct in the hand, both in a forward and reverse grip. The knife also needed a deep choil for safety in the open position, and it would need a wave opening feature to provide instantaneous opening when deployed from the pocket. In addition, the pocket clip had to be positioned so that the finger hole access would need to be readily available when carried in the pocket on either left or right side carry. And then, the overall knife design had to be such that it would fit the hand of the average man; not too big, not too small, but just right.

After some refinement and a few more pieces of cardboard, I was ready to commit the design to steel, titanium and G10. And I think I nailed it. The first folding Karambit knife was born. It hit the ground running and it has not slowed down one step ever since. It introduced the Karambit to both the tactical market and the general public for the very first time.

In conjunction with the development of the knife, I also produced the first video course dedicated solely to the use of the Karambit as a weapon, “The Complete Combat Karambit.” That video, along with the Emerson folding Karambit, sold tens of thousands of knives and videos in the ensuing years, ensuring the Karambit a place in cutlery history and in the world of tactical equipment as a legitimate, effective tool for personal defense becoming known far outside of the previous borders of Pencak Silat practitioners and the Indonesian martial arts community.

As a result, the Karambit, and specifically the Emerson Karambit and its further iterations, are now found in the hands of law enforcement personnel, soldiers, Special Forces operators, government agencies, as well as civilians all over the world.

Although there were some detractors in the beginning, I saw the value of this unique design and knew that the Karambit design was a knife that should be made available to any and all who wanted to have one. I decided to go all in, and also went on to design a larger version, the super Karambit, and a devastatingly effective and wicked, fixed blade version of the knife along with the first folding training Karambit. It was a decision I will never regret and a decision that secured the Karambit knife design an enthusiastic worldwide following, and a secure place in the future annals of cutlery history. 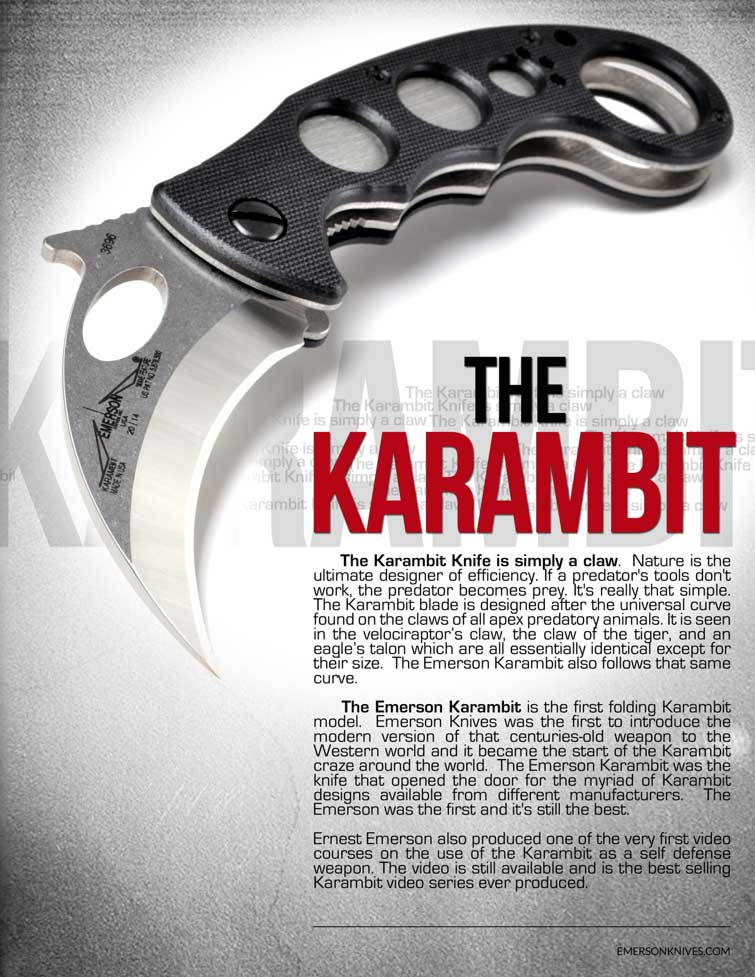