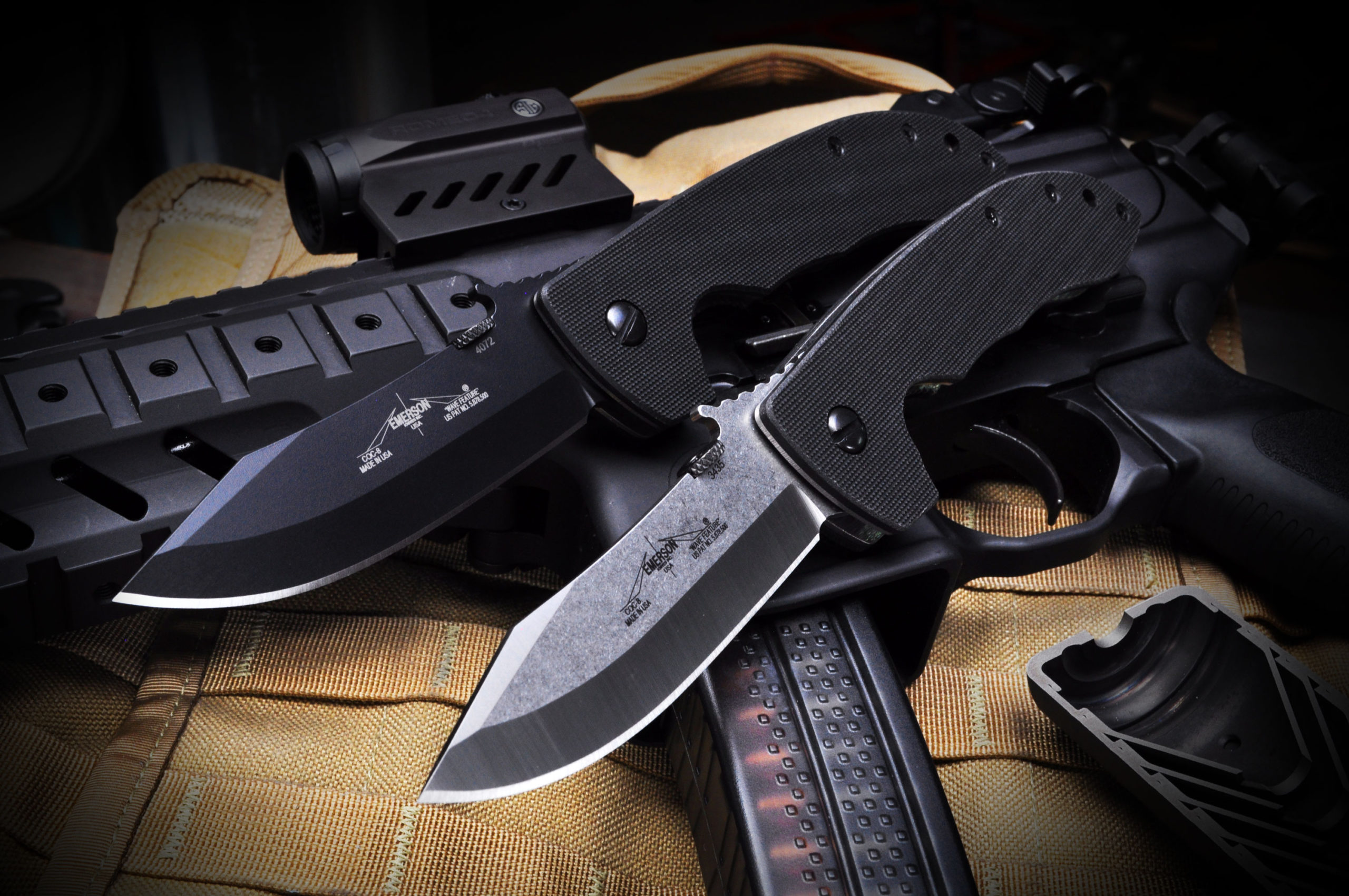 Ernest Emerson is a pioneer in both custom and production knives. Due to the popular demand for his customs by civilians and members of the armed forces alike, the wait list for one of his handmade knives grew exponentially. In 1996 Emerson Knives, Inc. was founded. In every major theater of operation the US is deployed in — “on or off the books” — an Emerson knife has been used, and used hard.

Ernest Emerson prides himself on making a 100% American-made product that will serve its owner for a lifetime. The Emerson CQC-8 is an icon in the tactical knife industry. Designed to be used in both saber and reverse grip when open, the “banana” as it is affectionately known, can trace its roots to the Bob Taylor/Al Mar Warrior and the Bill Moran ST-23. The 154CM stainless steel blade features a non-reflective black tenifer coating, upper swedge and a conventional V-grind. A thumb disc makes right- or left-hand opening easy and convenient, while the patented Emerson Wave opener makes one-handed opening the fastest of any folding knife. Textured G-10 scales provide positive traction in any grip style.

The slim format lends itself well to using the knife in a closed position as an impact device and is at home in evening attire as casual wear despite being all business. The Emerson CQC-8 has been “famous in the worst places”® due to its popularity with everyone from the SAS to the SEALs. Truly a modern classic design that is combat-proven.

The Emerson CQC-8 knife was a custom knife that I first made almost 30 years ago. It was 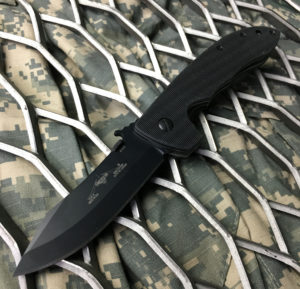 used by operators active in Bosnia and in a certain African country, where a small group of (less than 200) private contractors (Executive Outcomes) held off and defeated an entire army, in 6 weeks, which the U.N. had been unable to do with over 5,000 troops for 6 months. Its funny how they’ve just recently come back into the news.

Anyway, the Emerson CQC-8 was popular amongst certain groups within the SEAL community and the British SAS. It has a gentle S curve that places the knife in good hand position for use in either regular or reverse grips. It was designed to be a fighter from the very beginning and had ample use in both Eastern Europe and Africa. It is as pure a fighting knife as I had ever designed—that’s not to say that it is the “best fighting design” but that it was designed as a fighter from start to finish.

The current version of the Emerson CQC-8, now available directly from Emerson Knives as a factory built model has been updated to incorporate the patented wave feature. This feature, a small wave shaped projection on top of the blade catches and automatically opens the knife as it is withdrawn from the pocket.

This feature named the remote pocket opener, or “Emerson Wave” as known to most, is so fast that it will beat any other knife, from pocket to open, in the world. This includes any and all automatic knives. It has now become a standard feature on most of our knives and is important enough to be required on all military contracts that we are awarded. 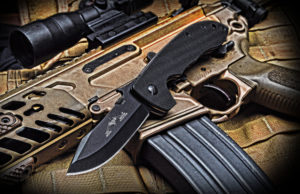 was originally nicked nicknamed, “the banana”, by the original crew that I designed the knife for and is still known by that name in some circles, mainly some European Special Operations units. It’s a great knife, I’ve always liked it and I’ve been all over the world with one in my pocket.

History:
The CQC-8 Custom
The knife developed for the legendary, Elite SAS Commandos: of the British Army. The knife was used extensively in the Balkans, Eastern Europe and Gulf War 1. Heralded by many of its users as the finest fighting knife ever developed, it is now part of British military lore along with the legendary Fairbairn Sykes Dagger.

A year or two ago Emerson developed the Emerson CQC8 or “Banana” folding fighter based on the Bob Taylor Warrior and the Bill Moran ST-9. Like the Warrior, the Banana is primarily a reverse grip fighter, yet in the saber hold the blade's point remains in line for thrusting.

To add the historical elite Emerson CQC-8 Knife to your collection, click here.