A Navy SEAL is auctioning a folding knife that he carried during the raid on Osama bin Laden's compound in Pakistan.

The Emerson CQC-7® stainless steel folding knife is among several items being auctioned to raise money for charities benefitting Special Operation Forces and their families, according to The Daily Caller.

The Emerson CQC-7®  knife was carried by “Mark Owen,” the pseudonym for the former SEAL Team 6 member who took part in the May 1, 2011, raid that led to the killing of bin Laden, the former al-Qaida leader blamed for the 9/11 terrorists attacks on the U.S.  Owen published a book about the raid, “No Easy Day: The Firsthand Account of the Mission that Killed Osama bin Laden.”

“I'm donating the (The Emerson CQC-7 ®) knife because the owner of Combat Flip flops is a friend and when he told me about this auction and all the good that the money raised was going to go towards, I wanted to help in any way that I could,” according to a statement attributed to Owen on the auction site 24fundrfaiser.com.

“Giving back to our community is very important to me and if donating this knife to charity helps with that process then I'm more than happy to do it!”

“I placed the knife into his hands,” Emerson told The Daily Caller. “He is known to me. … [The knife] is real, and it is his knife that was carried on the mission.”

Bidding on the knife ends at 8 p.m. ET on Wednesday. Credit MSN News for this article. 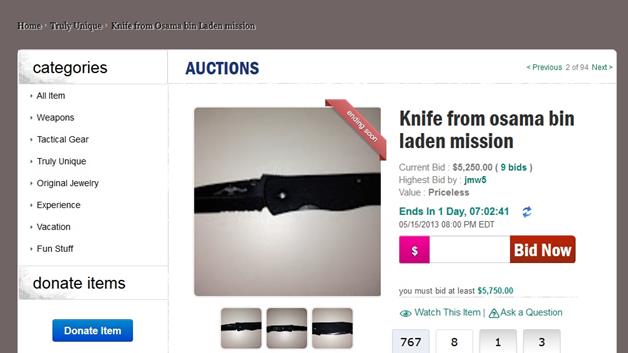