The Emerson CQC-6 knife is probably the knife that I am most known for. It certainly was the one that put me on the map and over the years I’ve made quite a few of them – but none like this one. As some of you know, my son Lucas and I are trying our hand at blacksmithing. So I had the crazy idea of hammering out some CQC-6 blades, so I made three of them and I really liked the results. This one features hammered out of 154CM blade steel, stunning blue anodized Mokuti bolsters and rough hewn solid brass handles. The knife is finished off with a full titanium ribbed backspacer, titanium thumb button, and pivot bolt all gold anodized set against beautiful blue anodized titanium liners. This knife is absolutely beautiful and is truly unique among all the other CQC-6 knives I have made over my career. It’s a beautiful and substantial piece worthy of any Emerson collection.

Some Emerson Knives are considered rare and some Emersons are Super rare. Such is the case with this knife, called the Emerson Japanese Six. In 1999, I was invited to come to Japan as an advisor to the then struggling Japanese Cutlery Industry. I had pictured factories like Toyota and Nissan producing knives in much the same manner, with state of the art technology. Needless to say that was not the case. It was like stepping back into a time machine, with things being done the way they had

been for hundreds of years. I had my work cut out for me.

Anyway to commemorate my visit I made a small handful of full dress Sixes to take with me. At that time modern tanto style blades were illegal to sell or own in Japan. I believe it was a hold over dating back to WWII restrictions. Only government licensed swordsmiths could produce traditional styled Japanese arms. Since my CC-6 was definitely a tanto styled blade I had to change the blade to stay “legal” in the eyes of the law, and, since I was changing the blade anyway, I decided to grind the bevel on the opposite side in the “correct” Japanese fashion for chisel ground blades. This is one of these knives that I had kept for myself and it has been sitting in my vault for 23 years. I decided to let it go for this special Christmas auction.

This is a beautiful, ultra rare, full dress pearl handled CQC-6 with striking stainless damascus that I had at the time from Devon Thomas. For any of you seeking the unique, rare or both, this knife will truly fill the bill. It’s marked 1999 with a #014 serial number.

This is a first, the first and only full dress Emerson Stealth knife. This design goes all the way back to my “Pre-Tac” days to a model I designed and built when I was still in my garage making knives. I actually worked on the Stealth program for the F117A Nighthawk Fighter and travelled to Groom Lake (Area 51) several times, so I designed a knife at that time inspired by the lines and angles of the Stealth Fighter.

This is a modern, dressed up version of one of my most sought after models. It features pearl handles and satin finished bolsters and liners with a striking stealth inspired blade. This is the only one and I doubt that I’ll ever make another. If you want this it may be the only chance you ever get to own one 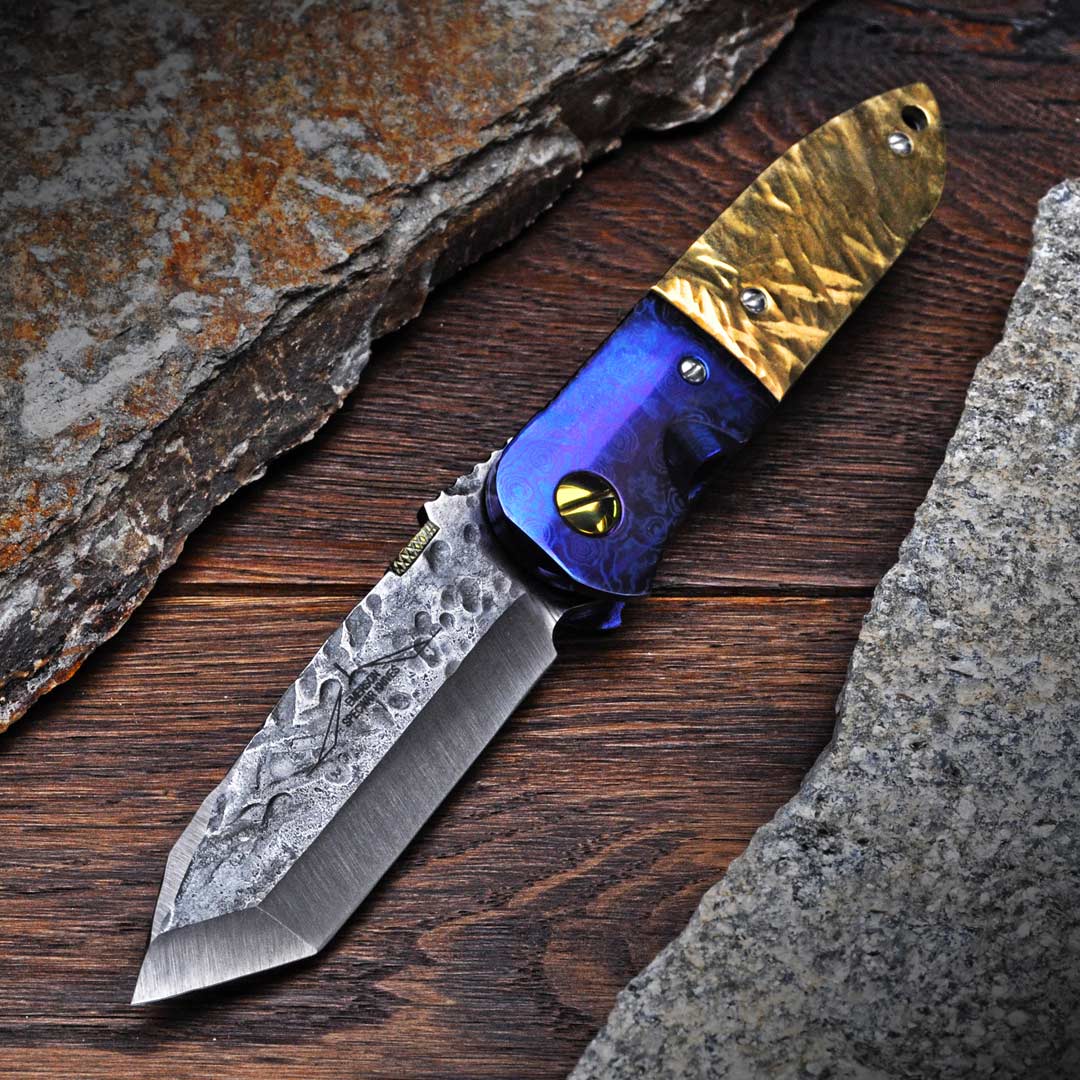